By Marc Portney Posted in - All American Makers & News & Uncategorized on January 13th, 2015 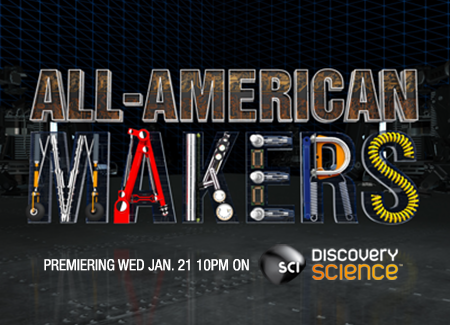 FROM THE GARAGE TO THE STORE, SCIENCE CHANNEL’S

Each maker’s homegrown product is put through a series of rigorous tests by Drumm and Roe to find out how it works and if it lives up to its claim. Should the product make the grade it’s then subjected to the scrutiny of real consumer focus groups. Based on the feedback of Drumm and Roe plus the focus groups, Portney decides if he wants to invest his own money in the maker’s business and help bring the product to store shelves. From dog toys, thermal radar and grill gadgets to personal robots, hybrid recreational vehicles and stain repellent, the products featured on ALL-AMERICAN MAKERS span the everyday to the amazing.

“This series is something brilliantly new for Science Channel,” said Rita Mullin, General Manager of Science Channel. “ALL-AMERICAN MAKERS is our twist on celebrating dreamers, doers and disrupters – those people who are innovating and pushing to make their incredible visions reality. In the way only Science Channel can, we’re focusing on the science behind the inventions using Brook’s and Brian’s expertise, but also making sure there is a tangible business opportunity for the products. The stakes are high on each decision as Marc is writing a personal check.”

Upcoming Episodes Include (All Times ET/PT):

Brook, Brian, and investor Marc Portney test out motorized roller skates users can strap to their shoes, a water filter that works like a French press, a 360º infrared surveillance device, and a gun that lets people shoot flies with table salt.

Marc, Book and Brian scrutinize four big claims: a bike that can ride on the water; robots  with programmable personalities; a device claiming to improve the speed of boxers; and a product claiming to give that user a healthy amount of sun without getting burned.

Experts Brook and Brian help Marc decide if he should invest in a brain-controlled toy helicopter; a non-toxic, liquid stain repellant; a fetch toy that dogs can control by themselves; or an airbag vest for motorcyclists.

Brook and Brian help Mark vet four innovative products: a remote controlled lawn mower; a revolutionary digital guitar; an indestructible flashlight that can power your electronics; and a bike helmet that records brainwaves while you ride.

Brook and Brian help Marc vet the claims of four new products: as shirt that claims to change colors as muscles heat up; a non-glue that dries at your command; a robot that clears disaster areas for first responders; and a product that hopes to revolutionize prosthetics.

Brook and Brian help Marc vet four new products: a vehicle that allows cyclists to reach highway speeds; a robot that automatically helps its owner; an electric fan that promises scorching charcoal in minutes; and shoe laces that might be the first-ever indestructible shoelace.